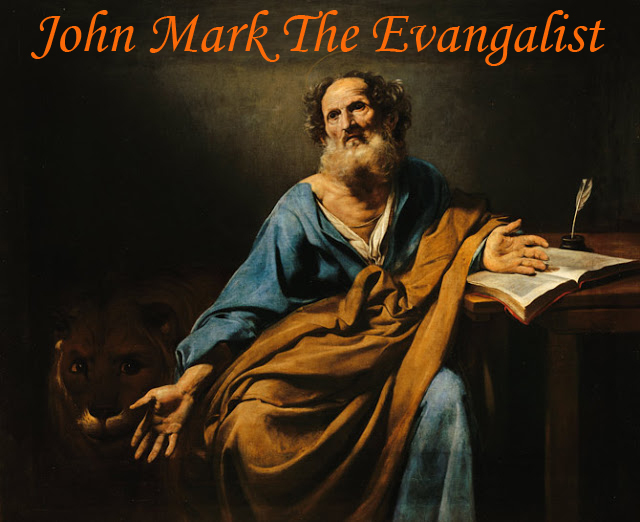 Our next Gospel writer is Mark or John Mark as he is referred to elsewhere in the bible.  It’s believed that, at the time of Jesus’ ministry, Mark was only about 12 years old.  He was not one of the 12 Disciples, but does appear to have been hanging around them at the time of Jesus’ arrest in the Garden of Gethsamane.  In his writings Mark gives an account of a young boy present during these events who evaded arrest himself by wiggling out of his linen garment and running away naked.

A young man, wearing nothing but a linen garment, was following Jesus. When they seized him, he fled naked, leaving his garment behind.   Mark 14:51-52

This account of the young man does not appear in the other 3 accounts of Jesus’ arrest and is believed to be one of if not the only personal account of Mark.  It’s believed that Mark was the young man and that he is including himself in the events as he is recording the life of Jesus as told to him by Peter.

This leads us to the next part of the story and that is that Mark is not recording events he witnessed (except for the garden arrest) but is recording what he is being told happened by the disciples.  Primarily he was a traveling companion to Peter and most likely recorded what Peter had experienced as he learned from the teacher himself.

Mark was the son of Mary, a wealthy woman from Jerusalem.  Their home had become a meeting place for the early church.  In fact, it was at Mary’s house that the church met to prayer at when Peter was imprisoned by Herod.

So Peter was kept in prison, but the church was earnestly praying to God for him.  The night before Herod was to bring him to trial, Peter was sleeping between two soldiers, bound with two chains, and sentries stood guard at the entrance.  Suddenly an angel of the Lord appeared and a light shone in the cell. He struck Peter on the side and woke him up. “Quick, get up!” he said, and the chains fell off Peter’s wrists.  Acts 12:5-7

When this had dawned on him, he went to the house of Mary the mother of John, also called Mark, where many people had gathered and were praying.  Peter knocked at the outer entrance, and a servant named Rhoda came to answer the door.  When she recognized Peter’s voice, she was so overjoyed she ran back without opening it and exclaimed, “Peter is at the door!”  Acts 12:12-14

Mary’s brother was Barnabus who would later take Mark (John Mark) on his missionary journeys with Paul.  However,  Mark would leave the group, possibly out in fear of entering the more hostile areas of Asia.  This upset Paul who would later refuse to take Mark along as Barnabus and he were preparing to head to Asia a second time.

From Paphos, Paul and his companions sailed to Perga in Pamphylia,where John left them to return to Jerusalem.  Acts 13:13

Some time later Paul said to Barnabas, “Let us go back and visit the believers in all the towns where we preached the word of the Lord and see how they are doing.” Barnabas wanted to take John, also called Mark, with them, but Paul did not think it wise to take him, because he had deserted them in Pamphylia and had not continued with them in the work. They had such a sharp disagreement that they parted company. Barnabas took Mark and sailed for Cyprus, but Paul chose Silas and left, commended by the believers to the grace of the Lord. He went through Syria and Cilicia, strengthening the churches.  Acts 15:36-41

My fellow prisoner Aristarchus sends you his greetings, as does Mark,the cousin of Barnabas. (You have received instructions about him; if he comes to you, welcome him.)  Colossians 4:10

Paul’s feeling towards Mark obviously changed as shown in the last verse above.  Paul sends instructions to the church at Colossea to welcome Mark and has already sent other instruction ahead of him.  Paul would again show his feelings when he calls for Timothy to send Mark to him as he struggles to preach the gospel amid persecution and desertion.

Only Luke is with me. Get Mark and bring him with you, because he is helpful to me in my ministry.   2 Timothy 4:11

Mark begins his writing with the start of Jesus’ ministry.  He leaves the geneology and birth to Matthew and Luke.  Mark begins with Jesus arriving on the scene to be baptized by John.

The beginning of the good news about Jesus the Messiah, the Son of God  Mark 1:1

Mark’s writing is influenced by his time spent with Paul.  He is also very detailed and concise with his writing.  Mark was referred to by many as “Mark the Evangelist” as he traveled from place to place trying to spread the good news.  However upon returning to Alexandria he was seized by a group of pagans who were upset that Mark was turning people away from their chosen gods and they killed him by placing a rope around his neck and dragging him through town.  This and other possible stories of his life in Alexandria are maintained by the Coptic Christians still today.  The Copts claim he was the Bishop of Alexandria and to this day, the Patriarch of Alexandria is the “Successor of Saint Mark”.  Hippolytus states that Mark was one of the Seventy Disciples sent out by Christ in Luke 10:1

Which brings us to our next writer… Luke   (Coming Soon)