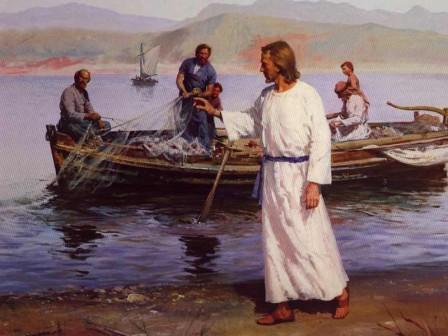 If I came up to you while you were working and said follow me…would you?  Probably not.  In fact, you’d probably laugh and go back to working and wonder when the men in white suits were coming for me.  So what made it so easy for common fishermen or a tax collector, who were hard at work, to drop everything and walk away from their jobs and follow a man who was claiming to be the same thing that thousands of others were claiming to be, The Messiah, (Emmanuel) without reservation or doubt.

“As Jesus was walking beside the Sea of Galilee, he saw two brothers, Simon called Peter and his brother Andrew. They were casting a net into the lake, for they were fishermen. “Come, follow me,” Jesus said, “and I will make you fishers of men.”  At once they left their nets and followed him.  Going on from there, he saw two other brothers, James son of Zebedee and his brother John. They were in a boat with their father Zebedee, preparing their nets. Jesus called them, and immediately they left the boat and their father and followed him.”  Matthew 4:18-22

These 4 fishermen may have heard of a man coming to Galilee, who had been baptized by John in the Jordan.  John’s disciples were most likely spreading the word that John had baptized the “Lamb of God”, but as yet Jesus had not begun his Ministry and to these simple fishermen would have likely appeared as crazy as me when asking for them to drop everything and leave.  So why did they?

“As Jesus went on from there, he saw a man named Matthew sitting at the tax collector’s booth. “Follow me,” he told him, and Matthew got up and followed him.” Matthew 9:9

Matthew held a much higher position.  His job as tax collector came with a greater responsibility, yet when Jesus said “follow me” he left “EVERTHING” according to Luke 5:28.

“Nazareth! Can anything good come from there?” John 1:46

Phillip is called to follow and gets his brother Nathanael who becomes known for that declaration.  This prompts Jesus to demonstrate to Nathanael who he truly is.

“When Jesus saw Nathanael approaching, he said of him, “Here is a true Israelite, in whom there is nothing false.” “How do you know me?” Nathanael asked.  Jesus answered, “I saw you while you were still under the fig tree before Philip called you.”  Then Nathanael declared, “Rabbi, you are the Son of God; you are the King of Israel.”  Jesus said, “You believe because I told you I saw you under the fig tree. You shall see greater things than that.” He then added, “I tell you the truth, you shall see heaven open, and the angels of God ascending and descending on the Son of Man.”” John 1:47

Now the work of Jesus is beginning and it’s easier to see how people can believe and follow him.  People hear Jesus teach and the word spreads.  He heals the sick and it spreads further and his ministry grows.  However, the first few disciples of Jesus, in particular Simon Peter, Andrew, James, John, Matthew, what compelled them to follow simply by him asking.  At a time when thousands of false prophets were claiming to be Emanuel (God with Us).

I believe there was something about the PERSON of Jesus that spoke to the soul of these men.  Something that did not need to be said.  Something in the nature of Jesus or rather the SUPERNATURAL nature of Jesus that reached into the heart of these men and allowed them to understand that this WAS God.  Could they have declined his invitation? Absolutely! By His nature God gives us free will and he does not want robots blindly following him around, but for these men, they were able to understand the person of Jesus in a way that they followed him without question.   I believe as we begin to understand that Jesus IS God, it helps us to understand more how the disciples responded to Him so easily.  It also puts His words into a different light.  I know I will be reading the red letters much differently now.

I spent a few hours with Chris Nicely our Middle School Pastor and some awesome new friends discussing the Person of, Words of and Works of Jesus tonight and this has lit a fire under me.  This blog is a result of tonight’s discussion and I would be remiss if I did not credit him and the rest of the group for inspiring it and some of it content 🙂  Thank You.

So I ask you… If these simple men 2000+ years ago could so easily respond to His request to follow him?  What keeps us from stepping out more like the church did then…today?